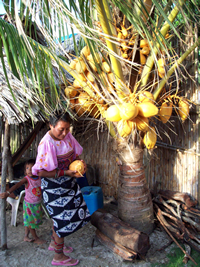 Historically, people living in remote island regions have struggled to carve out a living and sustain their culture. Instead of developing and growing properly, they usually end up fighting for survival or becoming solely dependent on others for survival.

The people and culture of the San Blas Islands, Panama, are a typical example of a remote semi-primitive island nation struggling to survive as modern development rapidly encroaches. With this come perplexing problems or possible extinction of the people and culture.

Allen & Kathy Sappington, founders of Floating Bible Schools International, in teamwork with other organizations, endeavor to save and empower remote island nations to help themselves and their culture, as well as other nations, to live and have a future. Floating Bible Schools International has developed an effective strategy to carry out this vision. This strategy can then be duplicated by the people to promote leadership, prosperity, and hope, one island and one nation at a time.

Allen Sappington lived his early years near a family homestead of long-standing in a rural area
outside a small town. At the age of five, Allen and his parents moved to a large urban city. Missing relatives
left behind, they spent most every weekend back in the country, where Allen and his father loved to fish and hunt together, and family get-togethers became common. During those times, a love for being around people surfaced in Allen’s character. He became amiable and outgoing. These two characteristics later would become his greatest strengths.
After high school graduation, Allen attended a rural college, and later enlisted in the Army Reserve.

After finishing the Reserves, he put his hand to many different jobs and started a couple of businesses, but none were fulfilling. This void changed dramatically when Allen received Jesus as his Savior at age 30. This experience placed him on the path where he would find work that was not only a success but brought total fulfillment. Bible school and mission’s training soon followed, and Allen’s inherent leadership and communication abilities began to get honed. Allen learned how to serve while climbing the executive ladder. Allen got his start in mission work when Allen took his vacation time to help with a large mission organization in Guatemala. While there, he received the directive to move to Panama and work to help the indigenous islanders.

Today, Allen and his wife Kathy, successfully and satisfyingly lead their own global mission’s organization in teaming up with others to help indigenous peoples in remote island nations.

Kathy Sappington entered life into a loving and nurturing family. Growing up between two
active brothers helped instill strength and fortitude in character. Kathy quickly fell in love with the natural rugged-
ness and adventure of the outdoors. Because her family was extremely active in Scouting, participation in camping activities as well as serving others became a regular part of her life. Kathy received the Lord as her Savior at the age of 14. This life-changing act forever corralled an unruly spirit trying to get into her disposition.

After graduating from high school, Kathy studied business and graduated from a local business school. Afterward, with
business skills set aside, she settled in as a homemaker. Time management and organizational skills, both greatly needed in ministry, developed while raising 5 children. During this time, Kathy regularly attended church and taught in children’s services. The ministry gifts developed as she served in weekly group meetings.

College was the last component needed. At 38, she sat once again in a classroom, but this time there were computers,
a must-know for today’s ministry work. Kathy graduated with a 2-year accounting degree, and continued her education at a local university.

Today, Kathy has five grown children and grandchildren, and lives with her husband, Allen, on the mission field on Nalunega Island, Panama. Kathy successfully ministers alongside Allen in difficult surroundings because of God’s faithfulness to deposit within her the necessary skills and characteristics of adventure, determination, loyalty, and service.